Looking back over 2015, it was quite an extraordinary year for home video releases. Companies such as Arrow Video, The Criterion Collection, Masters of Cinema and Twilight Time not only released a wealth of fascinating and brilliant films on blu-ray for the first time, but raised the bar in relation to restoration, packaging and supplements. Subsequently, narrowing this list down to only ten releases was a difficult process, but for me, these are the ten most essential new releases that I watched this year.

1. Cries And Whispers (The Criterion Collection)

It would never have previously occurred to me to describe Ingmar Bergman as one of my favourite directors. While he’s a director whose work I have always greatly admired, I’ve generally felt a detachment from his films, as if they’re supposed to be studied rather than enjoyed. However, given that my favourite blu-ray release of 2014 was Criterion’s astonishing edition of Bergman’s 1966 film Persona and my favourite blu-ray release of 2015 is their similarly brilliant edition of Bergman’s 1972 film Cries And Whispers, I probably need to re-evaluate that position.

Sven Nykvist won an Academy Award for his extraordinary cinematography on Cries And Whispers, but previous home video releases (including Criterion’s 2001 DVD release) suffered from a washed out colour palate which dulled the impact of his camerawork. Criterion’s new 2K restoration paid particular attention to restoring Nykvist’s original colour grading, particularly his striking use of red, which made revisiting Cries And Whispers through this release like watching an entirely new film. This amazing restoration played a significant part in choosing this as my blu-ray release of the year, with my opinion of Cries And Whispers basically going from “excellent but difficult” to “masterpiece”. The supplements on this release are a mix of those from the original Criterion DVD and several new pieces and all offer excellent insights into this extraordinary film. The fact that I watched Cries And Whispers twice on the day I received it, feeling compelled to rewatch the entire film immediately after watching the :: kogonada visual essay, is a testament to how well not only this supplement, but the film itself grabbed me. (Region A Locked)

Over the years I have owned numerous different releases of Army Of Darkness over pretty much every possible format, so it is with some measure of relief that I am able to say that Scream! Factory’s three-disc blu-ray of Army Of Darkness is absolutely the definitive home video version of this excellent film. This flawless package gathers together four different cuts of Army Of Darkness, with each version offering a different way of looking at the film, as well as a few unique scenes specific to that version unavailable on the alternate versions. On subsequent viewings I will more regularly return to the International Cut, as this not only has the best picture quality of the four versions, but is probably my preferred complete version. Apart from the four cuts of the film, this Collector’s Edition gathers together the numerous special features from all of the previous releases of Army Of Darkness, as well as several excellent new supplements. The best of these new features is the documentary Medieval Times: The Making Of “Army Of Darkness”, which provides excellent insights into the production and at 96 minutes is longer than most versions of the film. A full review of this set can be found here. (Region A Locked)

3. The Soft Skin and Day For Night (The Criterion Collection) 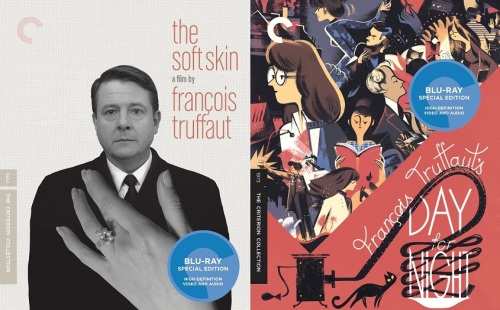 Although technically two separate releases, as these two great François Truffaut films were released within six months of each other by Criterion and the fact that the film within a film in Day For Night is essentially The Soft Skin, I feel reasonably comfortable grouping these two together. The Soft Skin is a fascinating piece of cinema, filmed in 1964 during Truffaut’s immersion into the films of Alfred Hitchcock, Truffaut uses every one of the master’s tricks of suspense, but transplants these into the story of an extramarital affair. This combination creates a completely unique film and oh my God is Françoise Dorléac gorgeous. The Soft Skin is quite possibly my favourite Truffaut film and if it isn’t, then Day For Night is. 1973’s Day For Night is one of the great films about making films, obviously heavily autobiographical, given that Truffaut himself is playing the director of a film that bears an uncanny resemblance to The Soft Skin, it is a love letter to cinema. Both releases are supported by superb supplements, the highlight being yet another superb :: kogonada visual essay on the Day For Night release. (Region A Locked)

Despite the considerable debate on the subject that I’ve read, I don’t think Carol Reed’s masterpiece The Third Man has ever looked better on home video than on Studiocanal’s new 4K restoration. Given Robert Krasker’s stunning black and white cinematography, having the best looking transfer of The Third Man should be reason enough to seek out this edition. However, this four disc Limited Special Edition is such an exceptional all-round package that it should be almost mandatory to seek it out. Stacked with excellent supplements, including a wonderful soundtrack disc, this package treats one of cinema’s greatest films with the level of respect it deserves. (Region Free)

I knew absolutely nothing about King Hu’s Dragon Inn prior to watching it and was absolutely floored by it. This 1967 Taiwanese martial arts film has been hugely influential on the genre and it’s easy to see its fingerprints all over films such as Crouching Tiger, Hidden Dragon and the entire filmography of Tsui Hark. The superhuman skills of the protagonists and the astonishing choreography of the action sequences, left an indelible impression on me and has me keenly anticipating Masters Of Cinema’s January 2016 release of King Hu’s 1970 film A Touch Of Zen. The supplements on the disc are pretty scant, but the booklet contains several fascinating pieces and quite frankly the film stands on its own. (Region B Locked)

David Cronenberg’s Videodrome is an audacious piece of filmmaking, an artistic and technical success which was so far ahead of its time that over thirty years after its release it is still strikingly original. Released in 1982 Videodrome foresees so much about what would happen with the internet, virtual reality and television, as well as portraying a frankness about sexuality that is still rarely seen in cinema today. In 2010, The Criterion Collection released an excellent Videodrome blu-ray which contained numerous indispensible supplements and appeared at the time to be the definitive release. Arrow Video’s 2015 Videodrome release is an amazing package and rather than replacing the Criterion disc as the “definitive” version, their excellent new supplements augment it (“AKA Jack Martin” on the novelisation of Videodrome with author Dennis Etchison is one of my favourite supplements of the year). This beautifully packaged set also features an excellent hardcover book and a fascinating disc of “David Cronenberg’s Early Works”. For the Criterion Blogathon I wrote a comparison between the Arrow Video and Criterion Collection releases of Videodrome that can be found here. (Region B Locked)

7. Shoah And Four Films After Shoah (Masters of Cinema)

Claude Lanzmann’s Shoah is not only an epic achievement in cinema, but a vitally important documentation of the human impact of the Holocaust. Eschewing archival footage or dramatisations of the events being described and instead filming at the often dilapidated or destroyed actual locations, as well as incorporating translators into the conversational flow, Shoah has it’s own distinct style that highlights the reliance on memory and perspective. Previously released by The Criterion Collection in 2013 (including the first “Three Films After Shoah”), the Masters Of Cinema release has a slightly better transfer and an exceptional 300 page book. The Masters Of Cinema release also contains Lanzmann’s shattering 2013 documentary The Last Of The Unjust which is sourced from a series of interviews Lanzmann held with the much maligned Benjamin Murmelstein one of the few survivors of Eichmann’s “model ghetto” Theresienstadt. Clocking in at over 1000 minutes, “Shoah And Four Films After Shoah” is a draining, but ultimately rewarding experience. (Region B Locked)

It has been an exceptional year for Arrow Video and Arrow Academy releases and I’m surprised that one or two more didn’t make my top ten. However, the “Hellraiser: The Scarlet Box” release is a fantastic summary of just what Arrow do best. A gigantic brick of a package, “Hellraiser: The Scarlet Box” has taken three half-forgotten cult films and given them superb 2K restorations and stacked them with hours and hours of bonus features as well as two commentary tracks for each film. The set also contains a fourth disc of supplements centred around Clive Barker and a beautiful 200 page hardcover book. While the three films contained in this set are certainly entertaining, they aren’t masterpieces, but the work put into this release by Arrow makes “Hellraiser: The Scarlet Box” indispensible. (Region B Locked)

9. The Apu Trilogy (The Criterion Collection)

The Criterion Collection’s release of Satyajit Ray’s “Apu Trilogy” is not only a near perfect box set of three of the masterworks of world cinema, but a testament to the art of film preservation in general and The Criterion Collection in particular. Released between 1955 and 1959, the three films are heavily influenced by Italian neo-realism and follow the daily life and many, many struggles of Bengali Apu and his family, from his childhood (Pather Panchali), to his education and adolescence (Aparajito) and on to adulthood and marriage (Apur Sansar). Each of these films stands alone as sublime pieces of filmmaking, however the cumulative effect of watching the three films together is breathtaking.

The restoration of these films has been an epic process after the extensive damage to the original negatives by fire and the transfers look immaculate across this set. As with seemingly all of my favourite Criterion releases this year, this set contains an exceptional visual essay by :: kogonada, this time a fascinating insight into the restoration process, with some additional behind the scenes looks at the Criterion offices. There is also his shorter restoration trailer (above), which gives a perfect summary of not only the epic scope of the restoration, but of the films themselves.  (Region A Locked)

When pushed to name my favourite films of all time, The City Of Lost Children is always somewhere in my top ten, so now that it has finally received a blu-ray release, it was always pretty much a certainty that it would be one of my favourite releases of the year. The second (and unfortunately final) collaboration between Jean-Pierre Jeunet and Marc Caro, The City Of Lost Children is a visually stunning fairy tale set in a future past filled with mad scientists, orphans, carnies, mutants and clones where it is always night. While the blu-ray is a marked improvement on the previous 1999 DVD release (which was a flipper disc featuring a “Widescreen” version on one side and the “Fullscreen” version on the other), the picture and sound quality are a little less than the film deserves. The disc features the original commentary track with Jeunet and Perlman and a couple of new mildly interesting behind the scenes features, but ultimately this is the best version available of one of my favourite ever films, so for me it is a disc that I will return to many, many times. (Region A Locked)