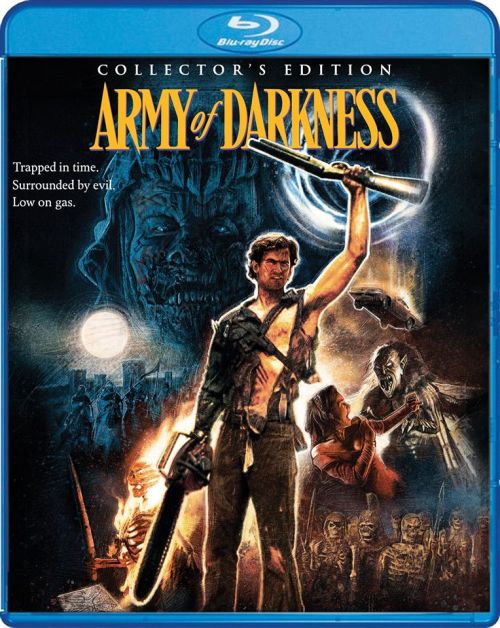 I think the fact that I watched all four of the different versions of Army Of Darkness contained in the amazing Scream Factory Army Of Darkness Collector’s Edition blu-ray package over the course of three days may give some indication of just how much I love this film. Over the years I have owned numerous versions of this film across pretty much every format and can now safely say that there is finally a definitive version and I can get rid of all of the other versions… Well, I can get rid of all of them except “The Necronomicon” blu-ray edition because that has some pretty cool packaging.

Army Of Darkness is the third film tracking Ashley J. Williams’ ongoing run-ins with the Deadites. Originally intended to be released with the rather witty title “The Medieval Dead”, bafflingly Universal didn’t want the film to be associated with the first two Evil Dead films, so it was given this rather random alternative title. Viewed sequentially the three Evil Dead films show a curious trajectory. The Evil Dead is a flat out horror film with Ash the square jawed hero. Plot wise Evil Dead 2: Dead By Dawn is essentially the same as The Evil Dead, but made as a blood-soaked cross between a Looney Tunes cartoon and a slapstick comedy, with Ash a considerable number of IQ points lighter. Army Of Darkness is very much an action-adventure film, picking up where Evil Dead 2: Dead By Dawn left off, with an increasingly dim Ash sucked through some kind of wormhole back to medieval times. While keeping much of the slapstick comedy and cartoon sensibilities of the previous film, it replaces the gallons of blood with lengthy sequences of stop motion animation heavily influenced by Ray Harryhausen’s iconic work on Jason And The Argonauts.

Every version of Army Of Darkness opens with Ash in stocks walking across an arid landscape accompanied by him saying in voiceover: “My name is Ash and I am a slave…”. It’s probably best to ignore the fact that at no point in any of the films is he a slave, it’s just a convenient way to get Ash to begin his narration of something approximating a summary of what happened in Evil Dead 2: Dead By Dawn, quickly explaining how he got to where he is and why he doesn’t have a hand. On the versions of the film with the “S-Mart ending”, this opening works a lot better, making this the start of the story Ash is seen telling to Ted Raimi’s bored clerk at the end.

I’ve always found Ash to be a wonderfully absurd choice for a hero, particularly in the last two Evil Dead films. Bruce Campbell plays Ash with the physicality and cocksure arrogance of one of those old school Harrison Ford heroes like Han Solo or Indiana Jones, yet with all the common sense and reasoning of Beavis and Butthead. This combination makes for ludicrous scenarios and hilarious dialogue, with Ash’s character perfectly summed up when he answers Lord Arthur’s question “Are all men from the future loudmouth braggarts?” with “No. Just me baby”. Not surprisingly, Bruce Campbell’s Ash has become an iconic character, this is partly due to the sheer physicality of his performance (particularly his unparalleled “reverse acting” skills), but also his flawless delivery of Ash’s often absurd dialogue. It is certainly difficult to imagine any other actor delivering the dialogue in the “boomstick” clip below, particularly the line “Shop smart. Shop S-Mart. YOU GOT THAT?”

The IMDB plot summary for Army Of Darkness is so brilliantly daft that it could have been written by Ash himself: “A man is accidentally transported to 1300 A.D., where he must battle an army of the dead and retrieve the Necronomicon so he can return home”. Indeed Ash finds himself in what appears to be the Californian part of England somewhere around the year 1300, where Lord Arthur and his people are not only at war with Henry the Red (Duke of Shale, Lord of the Northlands and leader of its peoples aka “Mister Fancypants”), but also the Deadites who Ash has been been battling since The Evil Dead. After defeating the Pit Bitch with the help of his trusty chainsaw and boomstick, Ash is determined to be the “Chosen One” who will help defeat the Deadites. Ash is tasked with retrieving the Necronomicon so that the Wiseman can recite the required passages to end the Deadites reign of terror and also send Ash back to his own time. However, Ash being Ash, he not only finds himself accidentally creating the army of the dead, but also giving birth to “Evil Ash” who will go on to lead them. With the help of “science”, “things with… molecular structures” and the Chemistry 101 book conveniently in the boot of Ash’s ‘73 Oldsmobile, Ash leads the “primitives” in an epic battle against the Deadites.

Comparing the different versions of the film one after another is a fascinating and sometimes frustrating process. Going from version to version, the variety of takes, edits and extended scenes often means that preferred versions of scenes, or in some cases favourite scenes are altered or entirely removed. Interestingly, the Theatrical Version is probably the least essential of the four versions. The only reason I can think of to watch this over any of the other versions is that you have an urgent need to watch Army Of Darkness, but only have 81 minutes to spare. This cut of the film, although it does have my preferred ending, doesn’t flow anywhere near as well as the other three versions due to the excessive editing of several sections of the film.

At 96 minutes, the Director’s Cut is the longest version of the film available and contains several extended sequences and alternate takes, as well as Sam Raimi’s preferred ending. The ending on this version of the film is probably more appropriate for Ash’s character having him change his fate because he can’t concentrate enough to count to six, but for me the other ending (“Name’s Ash. Housewares”) is far more enjoyable to watch and contains several of the best lines in the film. The Director’s Cut has a more coherent narrative than the Theatrical Cut or the International Cut, with longer versions of scenes providing more of a logical context between several sequences. This is true of the much longer version of the scene at the windmill with Ash, Evil Ash and all of the little Ashs, however, it should be noted that the only version of this scene which truly works is in the Television Version. In that version we’re given a logical reason for Ash running into the mirror and setting off this chain of events, which is absent from every other cut of the film. The Director’s Cut is the only version of the film with a commentary track, albeit one ported over from the original Bruce Campbell Vs Army Of Darkness (Official Bootleg Edition) DVD. As with any audio commentary featuring Sam Raimi and Bruce Campbell it is highly entertaining to listen to and it is also the best supplement in the package for getting Sam Raimi’s take on the film.

The International Cut is probably the version I will most likely watch the most. A 4K Scan Of The International Inter-positive, it is not only the best looking print of the four versions of the film, but taking into consideration the coherence of the narrative, preferred versions of scenes and the preferred ending, it is an imperfect but excellent cut of the film. For me, the particular benefits of this version over the Director’s Cut are the S-Mart ending, the extended scenes of the battle version of the ‘73 Oldsmobile in action and, of course, Ash uses the classic line “Good. Bad. I’m the guy with the gun” before shooting Evil Ash, rather than the weaker “I ain’t that good”. The windmill scene in the International Cut is heavily truncated compared to the Director’s Cut, although given that the version in the Director’s Cut is probably a little too long the best cut of this scene probably falls somewhere between these two versions.

The Television Version of Army Of Darkness is actually a bit of a revelation. Although it has the occasional amusing edit for language (“I never saw these eggheads before”) and a cut here or there for violence, of all of the versions of the film this is the one that actually makes narrative sense. It is the only version of the film where the windmill scene flows logically and where Henry The Red’s arrival to help in the battle with the Deadites is properly set up. The Television Version also contains the longest (and best) version of the ‘73 Oldsmobile in action against the Deadites. A perfect version of Army Of Darkness, would contain numerous scenes that are unique to this cut of the film, which is a pretty rare thing to say about a television edit. The fact that this version is framed in 1.33:1 and in standard definition only adds to its charm.

Even without the different cuts of the film, the Scream Factory blu-ray of Army Of Darkness is stacked with supplements. All of the bonus features that had been spread across the numerous previous releases of the film are included on this release, as well as some exceptional new content. The highlight of the new supplements is the 96 minute documentary Medieval Times: The Making Of “Army Of Darkness” which gives a fascinating and entertaining look back over the making of the film, the only shortcoming being that Sam Raimi is a notable absence from this and all of the other new supplements.

Scream Factory have assembled what can only be described as the definitive release of Army Of Darkness and for people like me who have seemingly been purchasing a slightly different version of the film every couple of years this comes as somewhat of a relief. Apart from the fact that Army Of Darkness has never looked or sounded better, this collection is packed with every bonus feature imaginable. If you are a fan of the film this is an absolute must have. Hail to the King, baby.

2 thoughts on “Army Of Darkness”