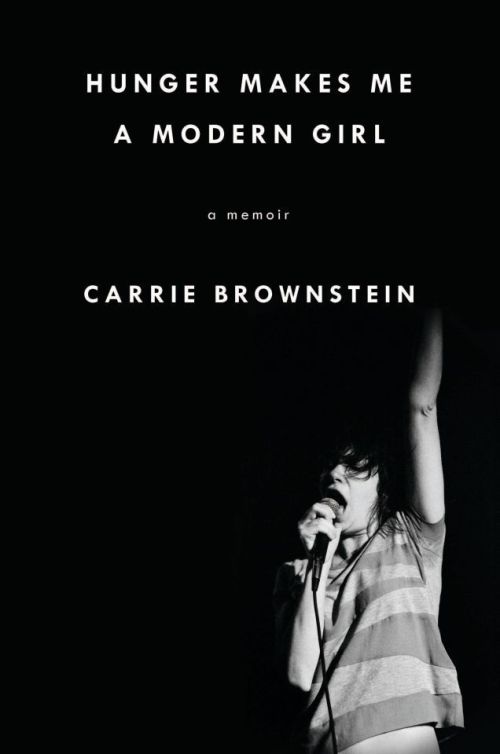 I’ve been looking for a book like Carrie Brownstein’s Hunger Makes Me A Modern Girl for years. Sleater-Kinney have been my favourite band since somewhere around the release of One Beat and have been crying out for a decent book on their history, if for no other reason than to provide some kind of explanation of what happened in 2006 to led to those dreaded two words “indefinite hiatus”. However, it was unexpected that this book would be written by a member of the band.

Hunger Makes Me A Modern Girl opens on May 27 2006, immediately answering that long standing question of “what happened” with Carrie stating “I was about to destroy Sleater-Kinney”. We are then taken back to Carrie’s childhood in Redmond, Washington with the first section of the book “Youth”. Although written with humour and affection Carrie describes a complicated household with her mother regularly in treatment for anorexia. Carrie regularly casts herself as an entertainer throughout her childhood and teen years, with music a dominant focus of her youth (her anecdotes about seeing live shows by Madonna and George Michael are wonderfully realised). The first section of the book ends with Carrie dropping out of her college, inspired by the music scene in Olympia in general and talking to Corin Tucker in particular, to enrol there.

Sleater-Kinney have been at the periphery of a number of good, great and indifferent books focussed on Riot Grrrl (and anyone with even a passing interest should read Girls To The Front by Sara Marcus), but these books are steadfastly focussed on the politics of the Olympia and Washington DC scenes and the first wave of bands like Bikini Kill, Bratmobile and Heavens To Betsy. The chapter “Schooled” gives a personal view of that scene and the beginning of Sleater-Kinney following Carrie’s Excuse 17 touring with Corin’s Heavens To Betsy. In this section Carrie gives about as perfect an explanation for the uniqueness of Sleater-Kinney’s sound as I’ve read, detailing the unique tuning of Corin’s guitar and the astonishing interplay between their guitars and voices.

The “Self-Titled” chapter details the band’s rather unusual step of travelling to the other side of the world to start the band. Carrie and Corin arrived in Australia in 1995 with a few vague contacts and no drummer. Carrie gives an entertaining account of their travels, ending with the recruitment of drummer Laura MacFarlane and the recording of their first album in a makeshift recording space the day before they flew back to America.

Hunger Makes Me A Modern Girl tracks Sleater-Kinney’s career album by album with the occasional diversion to a related topic. The most fascinating of these are “Hello, Janet” and “Opening Up”. Janet Weiss joining the band and the immediate impact that she had on the band’s sound is detailed in the chapter “Hello, Janet” . Janet was the missing piece that took Sleater-Kinney from being a good band to a great band. Carrie gives this beautiful description of the first time they played together: “Janet hit the drums harder than anyone we’d played with… Janet had learned all the songs from Call The Doctor as well. She bashed out a body, a spine, finally making that album title sound like an order and not a plea”. “Opening Up” is an excellent chapter about the support bands Sleater-Kinney have toured with and their process for choosing them. Beginning with tales of touring with Black Keys, Gossip and The White Stripes as their support acts, the focus is then switched to their long and career changing association with Pearl Jam and the impact that it had on their music.

Hunger Makes Me A Modern Girl offers so many superb insights into Sleater-Kinney’s career that it is an essential read for any fan of the band. Particularly fascinating for me was Carrie’s complete obliviousness until much later about the lyrics Corin had written about her on the Dig Me Out album (“Who is ‘Jenny’? Who is the person with the ‘darkest eyes’ in “One More Hour”? Certainly not me”) and the internal frictions in the band on the Dig Me Out tour over Corin’s relationship with (now husband) Lance Bangs. Carrie’s description of the post 9/11 political environment and its impact on music at the time offers an excellent context to the One Beat album and a succinct explanation as to why there aren’t more songs out there like the brilliant “Far Away”. It was also nice to have the confirmation of one thing that I always suspected about the recording of The Woods: “We played Led Zeppelin records and read”.

Life on the road is portrayed in about the most unglamorous way that I have read in any rock memoir and ultimately given as the cause for the break-up of the band in 2006. Carrie’s health issues which manifested themselves across several tours obviously darken her view of touring, but the portrayal of endless journeys in tiny shared vans is profoundly unappealing. That said, when as a result of motherhood, Corin initiated the band’s first lengthy break from touring between One Beat and The Woods Carrie found herself desperate to make herself busy, moving to California and throwing herself into study and other activities. This proves to be the background to “Jumpers” (which I consider to be the greatest song ever written) and for me, being given the full story behind this song alone makes the book worth reading. Notably playing “Jumpers” as a band in rehearsal is referenced as the pivotal moment at both the end (“When I finished the song, Corin and I were both crying. It’s when and how I said my own good-bye”) and the rebirth of the band (“This time it was not about death, it was about being alive”).

After nearly five years of absence, from 2010 to 2013 it became increasingly clear that the members of Sleater-Kinney were bursting with a new found musical creativity. In early 2010 Quasi released the brilliant American Gong, with The Corin Tucker Band releasing the fascinating 1,000 Years later that year. 2011 saw Janet and Carrie join forces for the awesome Wild Flag album, before Corin really hit her stride with the excellent Kill My Blues in 2012. Janet then returned to Quasi and threw off the typically great Mole City. None of this is remotely touched on in Hunger Makes Me A Modern Girl, but tellingly the moment in 2011 (in the middle of this creative burst) where Corin asked Carrie if she ever thought Sleater-Kinney would play together again is. Looking at this timeline, it not only puts a fascinating new perspective on each of these albums, but makes me wonder how the hell they were able to keep the return of Sleater-Kinney such a secret.

Hunger Makes Me A Modern Girl is eloquently written and filled with affection and good humour. Dedicated “For Corin and Janet”, above all else it is a love letter to Sleater-Kinney, the band that Carrie says “saved my life over and over again”. Despite everything else that Carrie Brownstein has achieved in her life and career (Portlandia, for instance), Hunger Makes Me A Modern Girl is a book about Sleater-Kinney. The first section “Youth” essentially provides a back story as to how in her search for a “family” she found her way to Olympia and then Sleater-Kinney, with the bulk of the book focussed on 1995 to 2005, the ten years Sleater-Kinney were creating music, before jumping forward ten years later to 2015 as Sleater-Kinney play before an audience for the first time since 2006. After the tumultuous lead up to the band’s “indefinite hiatus” and the difficult aftermath, Hunger Makes Me A Modern Girl triumphantly ends with Carrie at stage right and the acknowledgement that “I was home”.

4 thoughts on “Carrie Brownstein – Hunger Makes Me A Modern Girl”