Every year there is an album that I enjoy on first listen, but which unexpectedly grows on me over the course of the year to become one the handful that I return to regularly. Matthew E White’s Fresh Blood is that album for 2015. While I liked White’s 2012 debut album Big Inner enough to seek out his follow-up on release, Big Inner never resonated with me the way that Fresh Blood has. 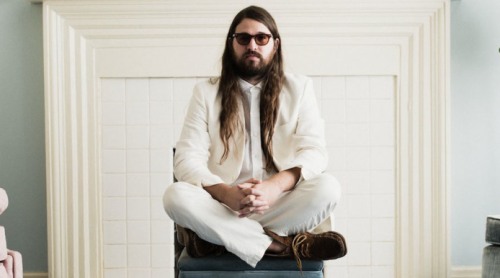 I am grateful that the first handful of times I listened to Fresh Blood I was wearing headphones. This is an album to be immersed in and the orchestration and his vocals shine when you are able to completely focus on the music.

On a subsequent listen when I attempted to play the album as background music while cooking and eating it just flat out didn’t work. Unlike a lot of recent music, if you don’t make the effort to actually listen to this album, its subtlety may result in it fading into the background. The following night I played the album again, but at a much higher volume and it was magnificent. Played loud Fresh Blood is a mesmerising experience, although it will most likely have the effect of subduing conversation. The first conversation I had listening to Fresh Blood as loud as is sensible went along the lines of:

There is an obvious influence and outright love of R&B and gospel present throughout the album, with Stevie Wonder and Marvin Gaye being obvious touchstones. This is underscored with both being name checked on the last track “Love Is Deep” (“Ain’t it so, Marvin?/Ain’t it so, Stevland?”). However, there is a more complex sound throughout, with magnificent orchestration reminiscent of the best of Spiritualized and a rootsy feel calling back to The Band.

The opening track “Take Care My Baby” sets the tone for the album. It’s a soulful declaration of love, which like the best R&B songs says so much more in the tone of the vocals than the lyrics do, or ever could (although “Let me look at you/Oh, I’m pumping fresh blood for you” are pretty damn fine lyrics). Not that White has what would be defined as a great soul voice, his vocals are quite understated and often at odds with the lush music, but that contradiction is what makes this album so unique and one of the reasons I think I keep going back to it.

The first single “Rock and Roll Is Cold” is based around a fairly traditional blues structure (think the Velvet Underground’s “Run Run Run”), but lifted by beautiful orchestration and White’s distinctive delivery of tongue in cheek lyrics. In the song White appears to be telling a critic who has accused him of faking the sincerity of R&B and gospel in his music, that unlike rock and roll, these genres require too much honesty for that to be possible.

White is able to tell a pretty engaging story often around some pretty dark subject matter in the space of a five minute song. “Holy Moly” is about sexual abuse within a church, while “Circle ‘Round The Sun” tries to find meaning in the suicide of a friend’s mother. “Tranquility” also touches on death, written as a tribute to Philip Seymour Hoffman and released on the first anniversary of his death. “Feeling Good Is Good Enough” strikes a different tone, albeit one imbued with desperation, as a failed couple reconnect and spend the night together.

Matthew E White is an engaging and soulful musician who is able to take you on a unique and fascinating journey with each song. Fresh Blood is an album that I know that I will be regularly returning to for many years to come and what better way is there to define a great album than that?