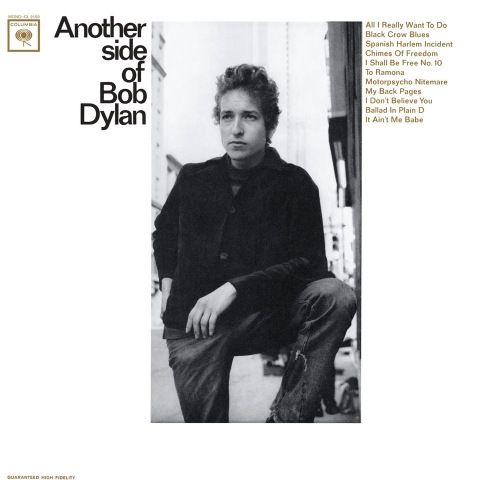 Another Side Of Bob Dylan is Bob Dylan’s fourth studio album and is one that is too readily dismissed. Recorded just five months after The Times They Are A-Changin’, the album comes at an interesting point in Dylan’s career and is unique amongst his discography. The album is often referred to as Dylan’s last “folk” album and musically this is correct, the album was recorded solo by Dylan on vocals, acoustic guitar and harmonica in a single session on June 9 1964. However, lyrically Another Side Of Bob Dylan breaks away from the earnest protest songs and tales of injustice so prevalent on the previous albums.

Although it would be with side one of his next album Bringing It All Back Home, that Dylan would upset the folk community by “going electric”, this album lacks the righteous anger of its predecessor and sees Dylan clearly distancing himself from the folk protest singer label. As a result, Another Side Of Bob Dylan is a much more enjoyable album to revisit than The Times They Are-A Changin’. Conceptually this album begins the departure from Dylan’s folk albums to the three great albums which followed, structured with a similar balance between the humorous, the romantic and the serious.

Unlike the previous two albums, Another Side Of Bob Dylan doesn’t contain any “marquee” Bob Dylan songs. However, if the quality of a Bob Dylan album was measured by the quality and quantity of associated covers by The Byrds, this would probably be his greatest. The Byrds released covers of four tracks from the released album (“Chimes of Freedom”, “My Back Pages”, “Spanish Harlem Incident”, and “All I Really Want to Do”), as well as one unreleased track from the recording session (“Mr. Tambourine Man”).

The opening track “All I Really Want To Do” sets the tone for the album. Supposedly a reflection on his break-up with Suze Rotolo, it’s a rather whimsical analysis of relations between men and women. Essentially comprised of a series of four line lists of physical or mental actions that the narrator doesn’t want to do to the subject (“I ain’t lookin’ to compete with you/Beat or cheat or mistreat you/Simplify you, classify you/ Deny, defy or crucify you”) before each verse ends with “All I really want to do/Is, baby, be friends with you”.

Despite the fact that the lyrics appear to capture one side of an argument, there is a good humour that runs through the track. Dylan ends every “all I really want to do” line in a jokey falsetto and is clearly enjoying his wordplay, often using multiple rhymes within lines (“Analyze you, categorize you/Finalize you or advertise you”) and running an AAAAAA (you/you/you/you/do/you) rhyme structure on two verses. The laugh at the end of the couplet “I ain’t lookin’ for you to feel like me/See like me or be like me” in the final verse adds to this overall sense of levity.

The fourth track “Chimes Of Freedom” is an extraordinary song and one of those Dylan songs regularly appropriated by musicians who take themselves far too seriously. The song is a master class in symbolism with two people sheltering from a thunderstorm in a doorway and reflecting on the outcast and the downtrodden, seeing the thunder striking in sympathy for them (“Far between sundown’s finish an’ midnight’s broken toll/We ducked inside the doorway, thunder crashing/As majestic bells of bolts struck shadows in the sounds/Seeming to be the chimes of freedom flashing’).

The skill with which Dylan’s lyrics evoke the storm is breathtaking and so far removed from anything on his previous albums: “Through the mad mystic hammering of the wild ripping hail/The sky cracked its poems in naked wonder/That the clinging of the church bells blew far into the breeze/Leaving only bells of lightning and its thunder”. The ability to then effortlessly associate the imagery of the storm back to the lives of the powerless is masterful. “Chimes Of Freedom” is a remarkable feat of song writing and a song that always feels to me like a more hopeful take on the brilliant “Rockin’ In The Free World” which Neil Young released 25 years later.

“My Back Pages” musically follows the format of many of the folk protest songs of the previous album, however, the protest in this song appears to be aimed more at his frustrations with folk protest music rather than any injustice. If the song is protesting anything, it seems to be the earnestness of his previous persona (“A self-ordained professor’s tongue/Too serious to fool/Spouted out that liberty/Is just equality in school”) and the folk scene in general. The refrain of “Ah, but I was so much older then/I’m younger than that now” perfectly sums up his disillusionment with being a “serious” protest singer and his desire to have more freedom to just enjoy making music. The first half of his next album Bringing It All Back Home, marks his definitive break from the folk scene, but “My Back Pages” is his expression of desire to get there.

The lighter mood of Another Side Of Bob Dylan is reinforced by the presence of “I Shall Be Free No. 10” and “Motorpsycho Nitemare”, two relatively absurd and humorous tracks. “Motorpsycho Nitemare” is a surrealist track similar in tone to “Bob Dylan’s Blues” from The Freewheelin’ Bob Dylan album. The song begins by telling the story of a weary traveller asking to stay the night at a farmhouse and then somehow becomes about a gorgeous woman (“Then in comes his daughter/Whose name was Rita/She looked like she stepped out of/La Dolce Vita”) turning into Norman Bates (“There stood Rita/Lookin’ just like Tony Perkins/She said, ‘Would you like to take a shower?’”) and the traveller having to resort to shouting support for Fidel Castro in order to create a reason for him leaving (“I had to say something/To strike him very weird/So I yelled out/’I like Fidel Castro and his beard’”). These two tracks are an excellent precursor to the song writing style of the masterpieces Subterranean Homesick Blues and “Bob Dylan’s 115th Dream” from the album to follow.

The album ends with “It Ain’t Me Babe” a song which is indicative of the influences Dylan was taking in outside of the folk scene. Although it follows on from “Girl From The North Country” and “Boots of Spanish Leather”, in being the third time that Dylan had built a song around the English folk song “Scarborough Fair”, it is almost certainly a mischievous response to The Beatles track “She Loves You”. With the refrain of The Beatles song “She loves you. Yeah yeah yeah” answered wryly with “But it ain’t me, babe. No, no, no”, the progression from folk singer to the rock star on the first track on the next album (“Subterranean Homesick Blues”) in retrospect seems quite natural.

Although not Bob Dylan’s greatest album, Another Side Of Bob Dylan is the one that provided the stepping stone away from being an earnest young protest singer, which allowed him to soon become one of the great singer-songwriters. While the album doesn’t contain any of the recognised canon of “classic” Dylan songs, titles like “The Chimes Of Freedom” and “My Back Pages” are the equal of many of his more highly regarded songs.

Favourite Cover Version: The Byrds – “My Back Pages”

Echoes, Music, Tangled Up In Bob

Another Side Of Bob Dylan, Bob Dylan, Echoes, Music, Tangled Up In Bob, The Byrds